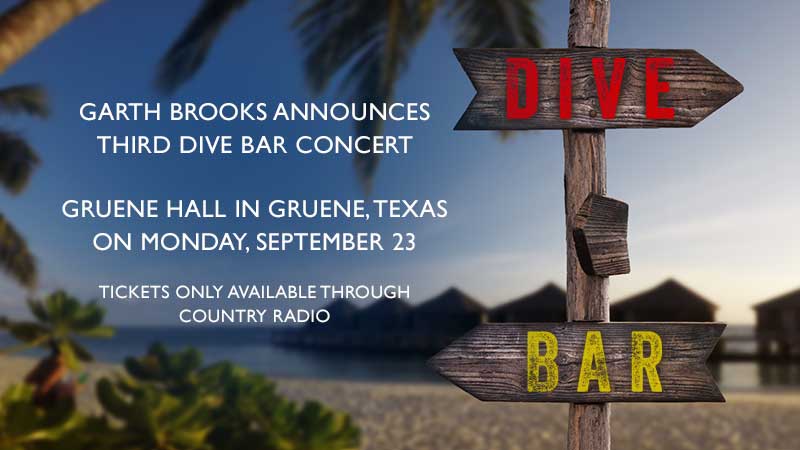 Tickets Only Available Through Country Radio

LOS ANGELES - August 20, 2019 -  Garth Brooks has announced his third DIVE BAR concert. It will be at Gruene Hall in Gruene, Texas, on Monday, September 23.

Garth announced that Texas would be the location of the next DIVE BAR stop last night on Inside Studio G, his weekly Facebook live series. Check out the video here: https://www.facebook.com/GarthBrooks/videos/2098936170409105/

Local country radio got to announce the date and name of the dive bar in Texas this afternoon. Tickets will be available to win exclusively through country radio, with more details to follow. All ticket holders must be 21 and over.

Fans eager to listen to Garth Brooks and Blake Shelton's new single, “Dive Bar” can now stream it exclusively on Amazon Music. It's already being called The Summertime Anthem!

"Dive Bar" is off Garth's upcoming album, FUN, which will be released soon. The day of its debut on country radio, “Dive Bar,” was the most added song with 135 total stations. Brooks and Shelton performed the song for the first time together live in Boise, ID on 7/19 on The Garth Brooks Stadium Tour.