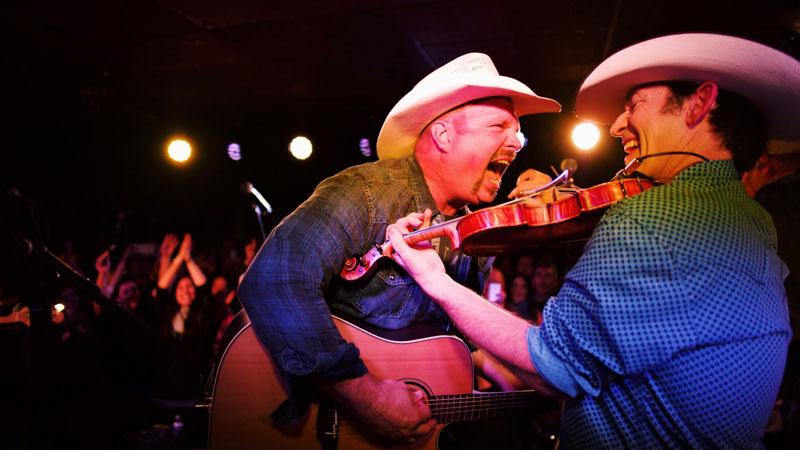 It Was A Boot Stompin' Good Time At Garth Brooks' Sixth DIVE BAR Concert At Prospectors In Mt. Laurel, NJ

The Only Way In Was To Win Through Local Country Radio

The place was packed to capacity with 500 people!

The only way in was to win through local country radio.

Garth also went live on Facebook after the concert: https://www.facebook.com/GarthBrooks/videos/459034601467044

This was the sixth DIVE BAR concert. The first was at Joe's on Weed Street in Chicago in July.  The second was at Buck Owens' Crystal Palace in Bakersfield, CA, in August. The third was at Gruene Hall in New Braunfels, TX, in September. The fourth was at The Barn in Sanford, FL, on October 16. The fifth was at The Dusty Armadillo in Rootstown, OH, on October 28.

Garth was originally scheduled to play a second show tonight at Six String in Foxboro, MA, but that show had to be rescheduled due to the weather.

This past summer, Garth joined Seagram's 7 to declare it the summer of Dive Bars! As part of the celebration, the pair pledged to help make our roads safer for everyone by never driving impaired and committed to securing 700,000 pledges this summer from dive bar patrons across the country at jointhepact.com. You can also use #JoinThePact on social media.

Garth Brooks’ new single “Dive Bar,” featuring Blake Shelton, which inspired the 7-date stint of dive bar shows, is available on Amazon Music. The “rowdy” (Rolling Stone) and “anthemic” (Billboard) new song was the most added song at country radio upon its debut and is taken from Brooks’ forthcoming studio album, FUN, and is his first musical collaboration with Shelton.

Garth is also in the midst of his record-breaking, “turbo-charged” (Variety) stadium tour. The final concert this year was at Neyland Stadium in Knoxville, TN! He broke the Neyland Stadium and the state of Tennessee's attendance record for a single-concert event. It was the tenth stop on the tour.