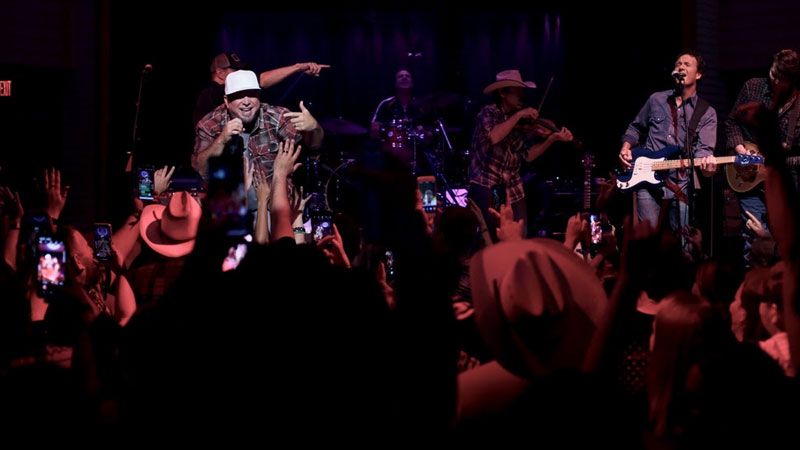 Buck Owens' Crystal Palace is the spot where Garth popped the question to now wife Trisha Yearwood at an event in May 2005.

This was the second of seven DIVE BAR concerts. The first was at Joe's on Weed Street in Chicago last month.  The remaining five are yet to be announced.

Garth recently joined Seagram's 7 to declare this the summer of Dive Bars! As part of the celebration, the pair pledged to help make our roads safer for everyone by never driving impaired and have committed to securing 700,000 pledges this summer from dive bar patrons across the country at jointhepact.com. You can also use #JoinThePact on social media.

Brooks also continues to draw in fans on the monumental THE GARTH BROOKS STADIUM TOUR, recently wrapping a powerful weekend in Canada bringing the “turbo-charged” (Variety) tour to Regina, SK’s Mosaic Stadium for two back-to-back shows Friday (8/9) and Saturday night (8/10) where Brooks unleashed hit after hit each night while entertaining 80,000 fans across both nights. Brooks will continue on the monumental tour with more show dates to be announced in the coming months.

Since the tour launch, Brooks has broken stadium attendance records in St. Louis, MO at The Dome at America’s Center, Glendale, AZ at State Farm Stadium, Gainesville, FL at Ben Hill Griffin Stadium, two sold-out nights at Minneapolis, MN’s U.S. Bank Stadium, Denver, CO at Mile High Stadium, Eugene, OR at Autzen Stadium and two sold-out nights at Boise, ID’s Albertsons Stadium shows on 7/19 and 7/20, both of which sold-out in under an hour, averaging just over 83,000 tickets in each city and over 830,000 tickets sold to date.