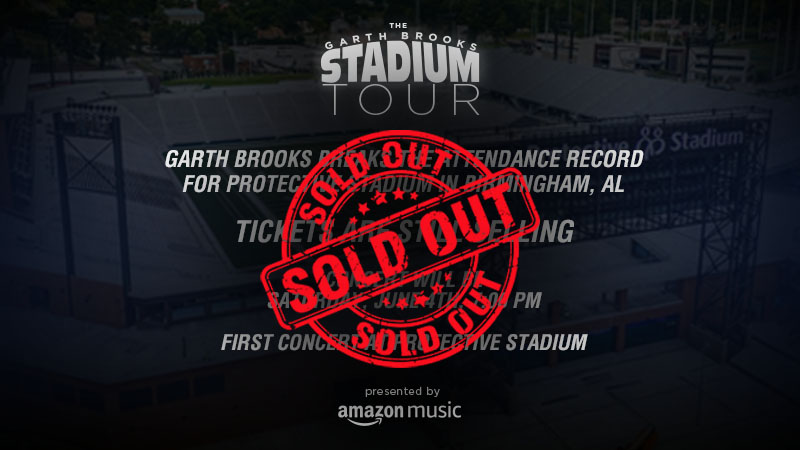 LOS ANGELES- April 8th, 2022-  Garth Brooks has broken the attendance record for Protective Stadium in Birmingham, AL! The record was formerly held by the University of Alabama at Birmingham football team, the UAB Blazers.

The concert will be Saturday, June 4th, 7:00 PM at Protective Stadium.

"It used to take multiple nights to play for this many in Birmingham and each night was insane," said Garth Brooks. "But now the thought of all those people being in one place at the same time makes me giggle with anticipation.  This is going to be CLASSIC!!"

This will be the first concert at Protective Stadium and Garth's first time in Birmingham in 7 years! This will be the only Stadium Tour stop in Alabama, Georgia and Mississippi.

It will be in-the-round seating. There is an eight ticket limit per purchase. There are only 3 ways to purchase tickets: at ticketmaster.com/garthbrooks or on the Garth Brooks line at Ticketmaster, 1-877-654-2784 or through the Ticketmaster App on your mobile phone.