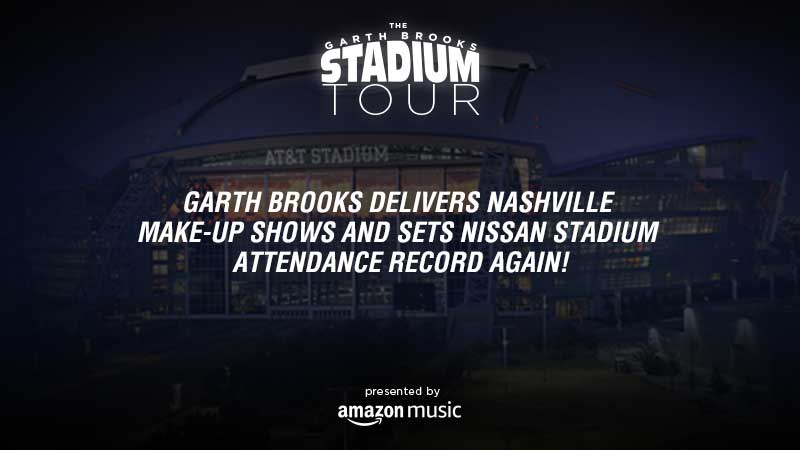 When the thunder rolled through Nashville in July 2021 and forced the cancellation of Garth Brooks' concert at Nissan Stadium, he was committed to rescheduling.
Reflecting on that night during a press conference before the first of two make-up shows, Brooks said, "The drive home (from the stadium) was horrible. People were walking around in knee-deep water, and there was nothing I could do. It was so hard to watch," adding, "You never get a second chance at a once-in-a-lifetime opportunity."
Brooks set another record at Nissan Stadium, with over 71,000 tickets sold at his make-up concerts on April 15 and 16.  The crowd showed up for a second chance, and he was determined to give it to them.
According to Jon Freeman of Rolling Stone, "That commitment to giving the people what they want is at the heart of the Brooks experience: Many fans in the crowd had been coming to see him since his imperial Nineties reign and are now bringing their children and grandchildren into the mix. The in-the-round design of the show placed a giant gazebo-like platform near one end zone, with Jumbotrons mounted atop its four tall columns, guaranteeing everyone the ability to see what was happening no matter where the always-in-motion Brooks happened to be standing."
Marcus Dowling of The Tennessean described Brooks' performance:
"On this evening, the robustness of the deeper registers of Brooks' tenor was notable and enjoyable on his 1995 hit 'She's Every Woman,' plus another deeper Fresh Horses album track, 'Ireland.'
Moreover, his abiding love of one of his musical heroes, George Strait, was apparent during this concert, too. Brooks singing Strait's 1982 smash 'Amarillo By Morning' is always a performance that reminds a concert-goer of how deep his love of country music goes.

When he's singing one of the great songs by the greatest hit-making artist of the genre's radio era, the 'everyman' part of Brooks' appeal is most resonant."