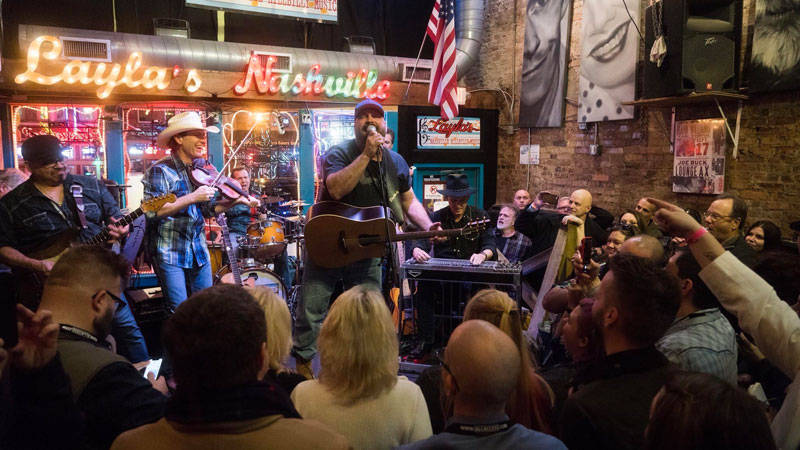 There’s a feeling in the air at Garth Brooks shows. It doesn’t matter if the performance is in a tiny club on Hillsboro Pike, the historic Ryman Auditorium, Nashville’s new Ascend Amphitheater, if it’s one of seven shows at Bridgestone Arena or – as it was Monday night - a bar on Lower Broadway.

Regardless of the venue size, the feeling in the air is the same. The atmosphere is electric, thick with anticipation. What will he do? Which songs will he sing? And inevitably fans find themselves washed in delicious, self-defining memories.

Brooks played an invite-only show at Layla’s Monday night. The intimate floor space was packed tight with country radio executives in town for their annual conference, Country Radio Seminar. That crowd can be jaded. Many of them have seen Brooks perform multiple times over three decades. But they showed up and when Brooks asked for requests – he added a catch. He wanted to hear the memory associated with the song – the reason it was their favorite. They clamored for his attention, screaming out the names of his biggest hits. Brooks would hear one he liked, point to the person who shouted it and wait on their story. Sometimes the song was what filled a generational gap between parent and child. Other times it conjured a pivotal moment in someone’s life. Sometimes that person was Brooks.

He packed himself and a six-piece band on the bar’s cozy’s stage. A rainbow of brightly-colored neon lights were overhead. When someone requested Brooks play “That Summer,” the singer asked why it was special. They replied they wanted to hear his story instead. At first he said he couldn’t comment past the lyrics of the song. Later he explained the actual reference for the line about a vast age difference hung on one year – he was a junior in high school and she was a senior.

The night overflowed with hits, and Brooks and his band strived to play most songs that were shouted out. He kicked the night off with “Two of a Kind Working on a Full House” and “Calling Baton Rouge.”