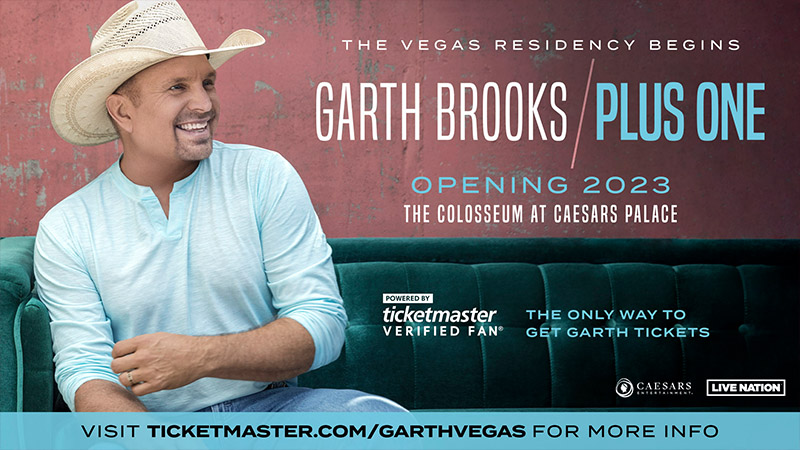 LAS VEGAS – Garth Brooks has announced a new headlining Las Vegas residency, Garth Brooks/Plus ONE, at The Colosseum at Caesars Palace beginning in 2023. Tickets for these shows will be available through registration using Ticketmaster Verified Fan.

“Vegas is the place where anything goes, and The Colosseum at Caesars is the heart of Vegas,” said Garth Brooks. “The perfect combination to present a show that will not only push the envelope, it's gonna shred it.”

Garth Brooks/Plus ONE will give fans the opportunity to see Garth up close and personal on The Colosseum stage. No two shows will be the same.  With varying band members and the occasional special guest, fans are promised a once-in-a-lifetime performance each and every night.  Whether it be one fiddle player, percussion and background vocals, or the whole band, each song, as well as every performance, will be a unique and shared experience night after night for Garth and his audience.

“Having Garth Brooks, one of the greatest of all time, bring his tremendous talent and an entirely new show to The Colosseum only adds to the remarkable legacy of Caesars Palace," said Anthony Carano, President and Chief Operating Officer for Caesars Entertainment. “We are confident that Garth Brooks/Plus ONE will be an unforgettable live entertainment experience for our guests, and we are honored that he’s chosen to join the Caesars Entertainment family.”

“When Garth Brooks dedicated himself to a Las Vegas Residency at The Colosseum at Caesars Palace, fans around the world were all definitely dealt a winning hand,” said Bob Roux, President of U.S. Concerts for Live Nation.

Garth Brooks has partnered with Ticketmaster Verified Fan to ensure that fans get first access to tickets. Registration is open now and will continue until Thursday, Nov. 17, at 8 a.m. PT. For more information and to register, visit ticketmaster.com/GarthVegas. A special commemorative boxed set also will be available for purchase during this process. The Verified on-sale will begin Monday, Nov. 21, at 10 a.m. PT for registered fans. Only fans who have received a unique code will have the chance to purchase tickets for performances on a first come, first served basis.

While Ticketmaster Verified Fan does not guarantee that every fan will get a ticket, it does make the ticket buying experience fairer by ensuring only other fans are competing for tickets. Due to the limited quantity of tickets available, if demand for tickets from Verified Fans exceeds supply, there will not be a public on-sale.

Citi is the official credit card of Garth Brooks/Plus ONE. Fans and Citi cardholders can take advantage of a special Citi Presale (powered by Verified Fan) opportunity for these residency dates. Fans and Citi cardholders can register now through Thursday, Nov. 17, at 8 a.m. PT to unlock access to tickets and use their Citi card to complete the ticket purchase if verified. The Citi Presale begins Monday, Nov. 21. To register for the Citi Presale powered by Verified Fan, visit www.citientertainment.com and link your Citi card.

In connection with the announcement of his Las Vegas Residency, Garth Brooks is releasing Garth Brooks LIVE LIVE, available for pre-order now.  The boxed set contains a 92-page custom book with live photos and 5 discs filled with over 50 of Brooks’ most beloved live recordings, as well as newly released recordings. The set includes the FINAL release of his celebrated Double Live album, with one of three randomly packaged collector's covers--the 25th Anniversary Edition of Central Park, the 25th Anniversary Edition of Croke Park, or the never-before-released 1989 Edition. Garth Brooks LIVE LIVE also contains Triple Live, featuring over 25 tracks from the record-breaking comeback tour and the Stadium Tour, including brand-new, never-released recordings and one of three new, randomly packaged collector's covers from the Stadium Tour.
The brand-new boxed set can be pre-ordered now for arrival before the holidays so fans can celebrate the live legacy of Garth Brooks until they can see him LIVE at his Vegas Residency in 2023. Pre-order information can be found at www.ticketmaster.com/GarthVegas.

Garth Brooks just completed the three-and-a-half-year-long Stadium Tour. It drew an average of more than 95,000 people in each city it played and was seen by a cumulative audience of nearly three million people. The tour ended in September when Garth played the fifth sold-out concert at Dublin, Ireland’s Croke Park. The five concerts were seen by over 400,000 people. Also in September, Garth was honored with the Kris Kristofferson Lifetime Achievement Award at the NSAI's Nashville Songwriter Awards, held at the Ryman Auditorium.

In May 2021, Garth Brooks was one of five artists to receive one of the most prestigious honors an artist can receive, The Kennedy Center Honor. Garth is the first-ever seven-time recipient of the CMA Entertainer of the Year honor. Brooks is the first and only artist in history to receive nine Diamond Awards for the now nine diamond-certified albums at over 10 million album sales each. He remains the #1-selling solo artist in U.S. history, certified by the RIAA with 157 million album sales. Last year, he was awarded Country Touring Artist of the Decade at the 2021 Pollstar Awards. In March 2020, Garth received the esteemed Library of Congress Gershwin Prize for Popular Song. The event aired on PBS. He has received every accolade the recording industry can bestow on an artist.

After the success of "Garth & Trisha Live!" during prime time on CBS in April 2020, CBS also aired "Garth & Trisha Live! A Holiday Concert Event," in December. Both specials featured Garth and Trisha taking song requests through Facebook, live from their studio, Allentown, in Nashville.

In November of 2019, A&E aired "Garth Brooks: The Road I'm On," over two consecutive nights. Part of their esteemed 'Biography' franchise, the documentary offered an intimate look at Garth's life as a musician and father over his entire career.

In January 2020, Billboard announced that Garth Brooks was the first artist to make it on the Billboard Hot Country Songs chart in the 80s, 90s, 00s, 10s and now 20s. Garth debuted "Much Too Young (To Feel This Damn Old)" in 1989. With "Dive Bar," a duet he sang with Blake Shelton, he made his appearance on the list in 2020. The single inspired a DIVE BAR tour to dive bars in country music capitals around the country which will continue its run of stops through 2022.

In 2019, Garth went vinyl with his meticulously-curated vinyl package, LEGACY. This career-defining collection includes No Fences, The Chase, In Pieces, Fresh Horses and Triple Live, plus CDs with bonus tracks for a total of 7 vinyl albums and 7 CDs in each edition.

Garth also has Inside Studio G, a weekly Facebook Live series. It airs every Monday on Garth's Facebook page at 7 p.m. ET.