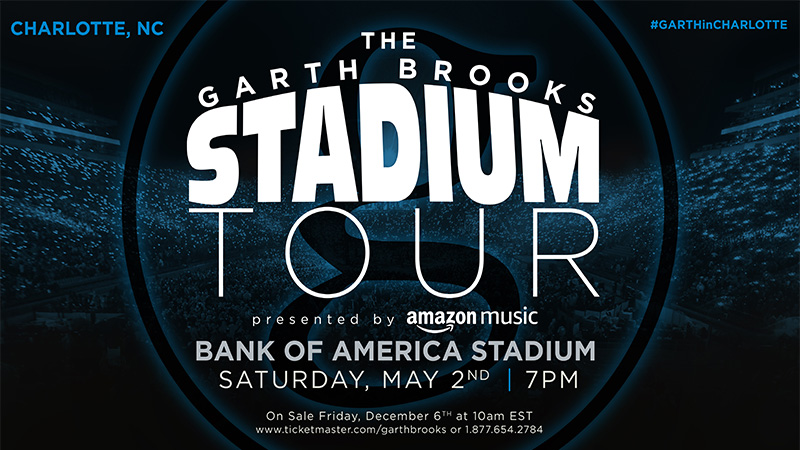 FIRST TIME IN CHARLOTTE IN 22 YEARS
ONLY NORTH CAROLINA AND SOUTH CAROLINA STOP ON THE TOUR!!!
SATURDAY,  MAY 2nd
PRESENTED BY AMAZON MUSIC

LOS ANGELES- November 26, 2019-  The Garth Brooks Stadium Tour is coming to Charlotte, NC. The concert will be Saturday, May 2, at 7:00 PM at Bank of America Stadium. It's Garth's first time in Charlotte, NC, in 22 years. This will be the only North Carolina and South Carolina stop on The Stadium Tour!

Garth Brooks has been awarded CMA Entertainer of the Year seven times, a first for any artist.

Garth Brooks' current single, "Dive Bar,” was recorded with Blake Shelton. The day of its debut on country radio, “Dive Bar” was the most added song with 135 total stations.  It was recorded for his upcoming studio album, FUN. The single inspired a 7-date DIVE BAR tour to dive bars in country music capitals around the country. In March, Garth launched The Stadium Tour. In the first nine stadiums they announced, Garth set massive ticket sale records.

Garth has also now gone vinyl with a new package titled, LEGACY. During the first pre-sale, Garth smashed records with 20,000 packages sold in under 18 hours.  Thats 420,000 vinyl records! Forbes noted, “To put this in context, The Beatles were the number-one vinyl artist in 2018 with 321,000 sales over 12 months.” Earlier in the year, Garth received iHeartRadio’s inaugural Artist of the Decade Award at the iHeartRadio Awards in Los Angeles.

In October of last year, Garth Brooks sold out the first ever concert at Notre Dame Football Stadium. The concert, "GARTH: LIVE AT NOTRE DAME!" was filmed for television and aired December 2 on CBS. Nearly 14 million watched. On November 20, 2018, Garth released The Anthology Part III, LIVE. It's a detailed look at the electrifying concerts of Garth Brooks. Garth Brooks debuted new music, "Stronger Than Me," at the CMA Awards. It was a surprise serenade to wife, Trisha Yearwood, that left everyone in tears.

Garth the first artist in history to receive 7 Diamond awards for the now seven albums certified by the RIAA at over 10 million album sales each and remains the #1-selling solo artist in U.S. history certified by the RIAA with over 148 million album sales. He has received every accolade the recording industry can bestow on an artist. Garth has been inducted into the International Songwriters Hall of Fame in New York, the Nashville Songwriters Hall of Fame, Country Music Hall of Fame and most recently, the Musicians Hall of Fame. Last year, Garth finished the three-and-a-half-year long, Garth Brooks World Tour with Trisha Yearwood. Forbes said of the tour, "Garth Brooks' World Tour Solidifies His Status As The Best Arena Act Alive." The tour smashed records previously held by such acts as The Beatles, The Rolling Stones, and even Garth Brooks. The tour played 79 cities and 390 concerts, with over 100,000 tickets sold in over 20 cities. The tour sold over 6.3 million tickets, making it the biggest North American tour in history and the biggest American tour in the world.