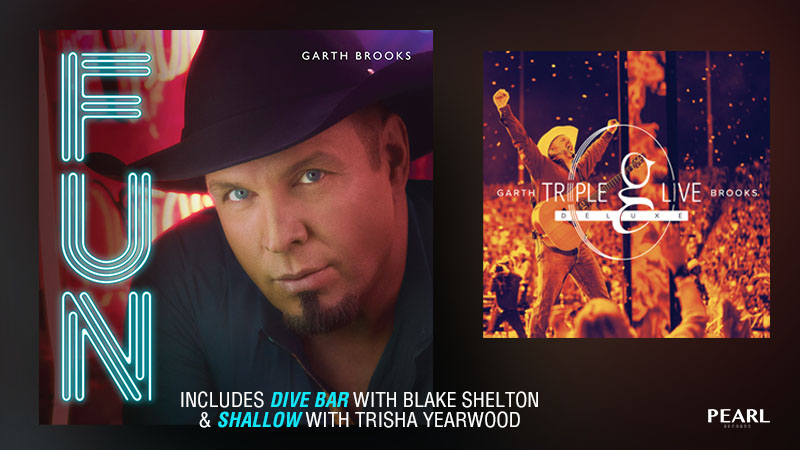 "Triple Live Deluxe"
Standalone Album For First Time - 30 Tracks, Three CD Live Album From The World Tour And Now With Tracks From The Stadium Tour Six Different Covers Each With Booklet Featuring Photos From The Road

Both on Sale November 20th

Hot off the heels of receiving the Billboard Music Icon Award on Wednesday, Garth Brooks is excited to release two new albums! His 12th studio album, FUN and live album Triple Live Deluxe will both go on sale November 20th.

Garth posted a video this morning inviting everyone to join him for a LIVE interactive preview of the albums on his TalkShopLive channel 10/21 at 7pm ET!

The album also includes a cover of SHALLOW with Trisha Yearwood, ALL DAY LONG and STRONGER THAN ME.

Due to fan demand in trying and difficult times, Garth did a digital only release of 7 tracks from FUN, exclusively on Amazon. There will be a standard release of the album but also a Limited Edition with a holographic foil cover.

Last year, when asked about FUN, Garth said, "The title of the album was sparked because making it has been such a fun process to go through. Being able to go in and out of the studio while being on the tour, working with the same guys, it’s been amazing."

Garth's first live record was his two disc album Double Live recorded during the 1996 - 1998 World Tour. It's the #1 selling live album in history, with 21 million albums sold, certified by the RIAA.

Triple Live Deluxe will be 30 tracks over three CDs in a slim jewel case. There will be six different album covers and each will include a booklet with photos from the road.

To see where both albums can be purchased, click here: https://garth.lnk.to/FUNpr