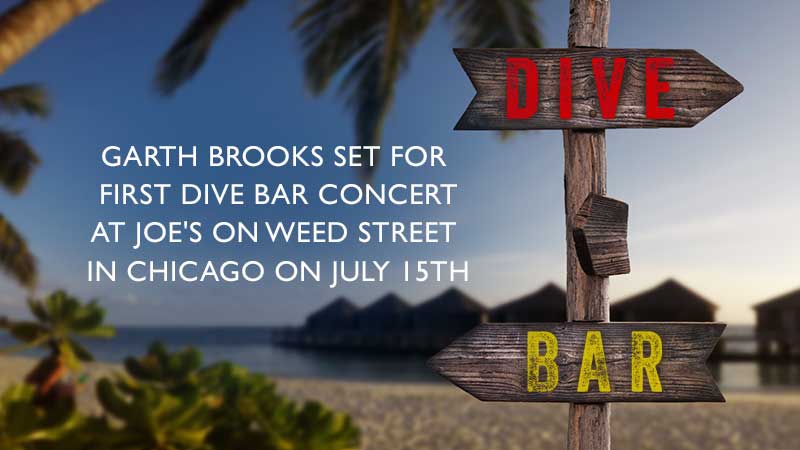 Will Be First Of Seven DIVE BAR Concerts Across The Country

LOS ANGELES- July 8, 2019-  Garth Brooks is set for his first DIVE BAR concert at Joe's on Weed Street in Chicago on July 15. The news was announced today on Chicago country radio stations WUSN and WEBG. Tickets for the concert will be available to win exclusively on those two stations. All ticket holders must be 21 and over. This will be the first of seven DIVE BAR concerts this summer, with the rest to be announced soon.

Yesterday, to celebrate National Dive Bar Day, Brooks announced he is teaming up with Seagram’s 7 Crown to make National Dive Bar Day last all summer long. Garth announced this on a special Sunday edition of Inside Studio G, his weekly Facebook live series. Check out the video here: https://www.facebook.com/GarthBrooks/videos/888231228197171/

“Dive Bar” will be available to stream exclusively on Amazon Music starting July 15.

"Dive Bar" is Garth's new single featuring Blake Shelton off his upcoming album, FUN, which will be released soon. The day of its debut on country radio, “Dive Bar” was the most added song with 135 total stations. Brooks and Shelton will be performing the song for the first time together live in Boise, Idaho, on July 19 on The Garth Brooks Stadium Tour.