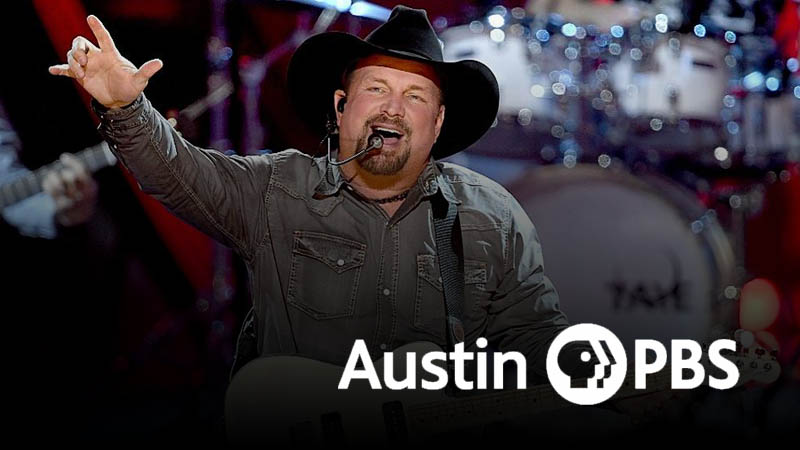 LOS ANGELES- March 3rd, 2020– Austin PBS, KLRU-TV is thrilled to announce that Garth Brooks will bid a final goodbye to legendary Studio 6A, longtime home to iconic music series Austin City Limits, with an intimate performance on May 24, 2020. Austin PBS’s Farewell to Studio 6A: An Evening with Garth Brooks will be a once-in-a-lifetime event celebrating an iconic institution.
“Thirty years ago, Garth made history when he stepped onto the Austin City Limits stage for the first time, and since then he has become one of the biggest worldwide stars in music history,” said ACL executive producer Terry Lickona. “We are thrilled and honored to have him return and make history once again, with the final performance ever on a stage that was the original home for what’s become the longest-running music series on television.”
After more than 50 years on the University of Texas Austin campus, Austin PBS is moving to a brand new home on the Austin Community College Highland Campus in Fall of 2020. The larger facility will be a modern, state-of-the-art broadcast studio as well as a community space that will allow Austin PBS to create new initiatives. The public television station will celebrate the move with one final musical salute in the historic Studio 6A. The intimate soundstage was the birthplace of the Peabody Award-winning series Austin City Limits, hosting the now-infamous 1974 debut taping with Willie Nelson, as well as the setting for history-making performances for 36 years, hosting hundreds of legendary artists and music innovators, including Ray Charles, Merle Haggard, Loretta Lynn, Stevie Ray Vaughan, Bonnie Raitt, Johnny Cash, Dolly Parton, Leonard Cohen, Pearl Jam, B. B. King, Foo Fighters, Dixie Chicks and more. Studio 6A was officially designated a Rock & Roll Hall of Fame Landmark in 2009 and was the featured location for the Austin installment of the Foo Fighters' 2014 documentary series Sonic Highways. The final Austin City Limits episode in Studio 6A was taped in 2010, when the program moved to its current studio home, ACL Live at The Moody Theater, in downtown Austin, where it will continue to be taped and is now in its 46th Season. Studio 6A has been used consistently throughout the years for community events, town hall discussions and many other Austin PBS programs including Arts In Context, Central Texas Gardener and Overheard with Evan Smith. The studio also hosted tapings for the TNN/CMT programs Legends of Country Music and The Texas Connection, as well as CBS’s Willie Nelson: The Big Six-0 60th birthday special.
A limited number of sponsorship opportunities are available to attend this historic evening. All proceeds from the event will benefit Austin PBS’s Moving Forward capital campaign to support funding for the new facilities. To find out more go to austinpbs.org/farewell. There will be no individual ticket sales for this event.
Garth Brooks has made two legendary Austin City Limits appearances in Studio 6A. He first appeared on the program in 1990, during Season 15. Just beginning his ascent to superstardom, Brooks performed his early hits “If Tomorrow Never Comes,” “Much Too Young (To Feel This Damn Old)” and “The Dance.”  The hitmaker returned a decade later to both open and close ACL’s milestone 25th anniversary season with two hourlong episodes, performing career highlights and fan favorites, including “The Thunder Rolls,” “Two of a Kind (Workin’ On a Full House),” and leading a massive crowd singalong to “Friends in Low Places.” Brooks’ relationship with Austin City Limits  goes beyond that of a performer. He is also a longtime fan.  “Buddy, this is ACL, ok?” he said during a post-show interview after his 2000 return appearance. “If we’re baseball players, this is the World Series.” He continued: “The thing I like about Austin City Limits is that it hasn’t changed, it’s still like getting around your family in your living room and playing music. I think that’s what I love most about it.”