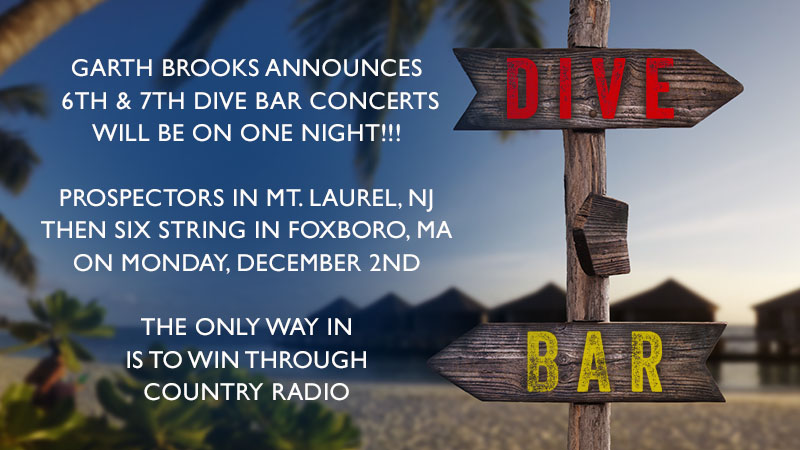 The ONLY Way In Is To WIN Through Country Radio

LOS ANGELES- November 5th, 2019-  Garth Brooks has announced the 6th & 7th DIVE BAR concerts will both be on Monday, December 2. The 6th concert will be at Prospectors in Mt. Laurel, NJ, just outside of Philadelphia. Later that evening, the 7th concert will be at Six String in Foxboro, MA. The exact times will be released closer to the event.

The first DIVE BAR concert was at Joe's on Weed Street in Chicago in July.  The second was at Buck Owens' Crystal Palace in Bakersfield, CA, in August. The third was at Gruene Hall in New Braunfels, TX, in September. The fourth was at The Barn in Sanford, FL, on October 16. The fifth was at The Dusty Armadillo in Rootstown, OH, on October 28.

Country Radio got to announce the date and names of the dive bars this afternoon.

Garth Brooks’ new single, “Dive Bar,” featuring Blake Shelton, which inspired the 7-date stint of dive bar shows, is available on Amazon Music. The “rowdy” (Rolling Stone) and “anthemic” (Billboard) new song was the most added song at country radio upon its debut and is taken from Brooks’ forthcoming studio album FUN, and is his first musical collaboration with Shelton.

Garth just released the music video for Dive Bar with Blake Shelton, exclusively on Facebook, and already it has 27 million views!  Click here to see the video.