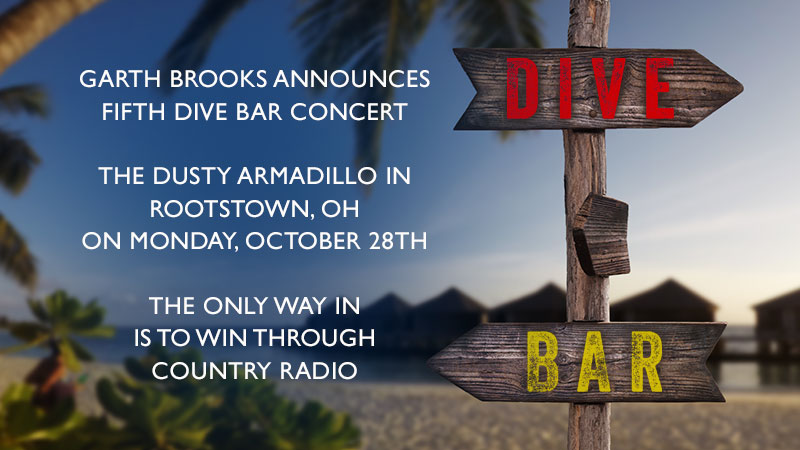 The Dusty Armadillo in Rootstown, OH On Monday, October 28th

The ONLY Way In Is To WIN Through Country Radio

LOS ANGELES- October 15th, 2019-  Garth Brooks has announced his fifth DIVE BAR concert. It will be at The Dusty Armadillo in Rootstown, OH on Monday, October 28th. The ONLY way in is to WIN through Country Radio.

The first three DIVE BAR stops were Joe's on Weed Street in Chicago in  July, Buck Owens' Crystal Palace in Bakersfield, CA in August and Gruene Hall in New Braunfels, TX in September. The fourth stop is tomorrow at The Barn in Sanford, FL.

Garth announced that Ohio would be the location of the next DIVE BAR stop last night on Inside Studio G, his weekly Facebook live series. Check out the video here: https://www.facebook.com/GarthBrooks/videos/396333787971554/

The full embed code is below.

Country Radio got to announce the date and name of the dive bar in Ohio this afternoon. All ticket holders must be 21 and over.