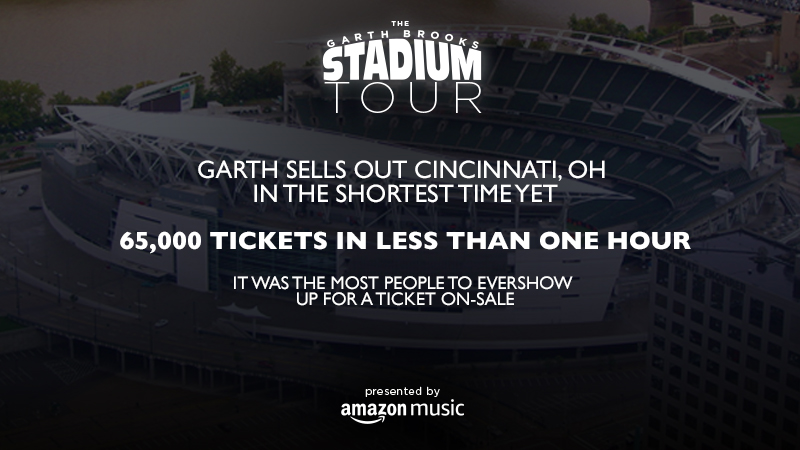 GARTH BROOKS SELLS OUT CINCINNATI, OH IN THE SHORTEST TIME YET - 65,000 TICKETS IN LESS THAN ONE HOUR

LOS ANGELES- December 13, 2019-  Garth Brooks has sold out Cincinnati, OH, in the shortest time yet. He sold 65,000 tickets in less than one hour. It was the most people to ever show up for a ticket on-sale.

The Garth Brooks Stadium Tour set the all-time record for entertainment in Cincinnati, Ohio, in 75 minutes with a sellout of 70,000 seats.

"First of all, my sincerest thanks to the great people of Cincinnati and the surrounding cities who made this on-sale the biggest and best one yet on this stadium tour," said Garth Brooks. "I know this sounds crazy, but I swear it feels like everything is starting to wake up.  2020 is off to the best start of any year in our career."

This will be Garth's first time playing at Paul Brown Stadium and the only Ohio, Kentucky,  and West Virginia date on The Stadium Tour!