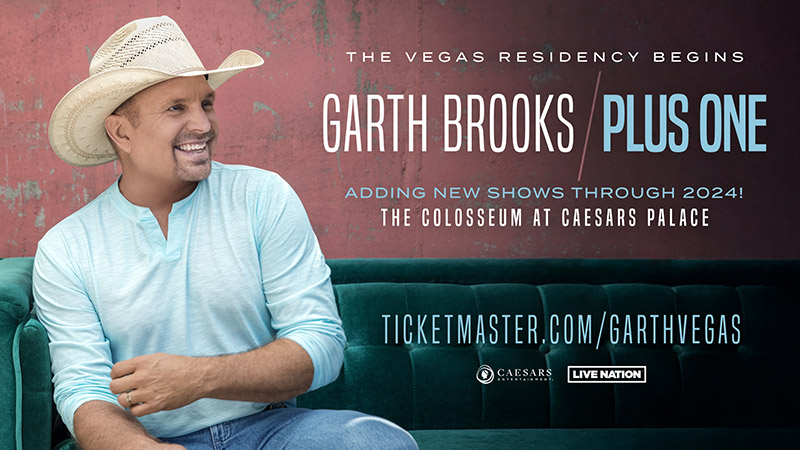 DUE TO EXTRAORDINARY DEMAND, GARTH BROOKS/PLUS ONE LAS VEGAS RESIDENCY AT THE COLOSSEUM AT CAESARS PALACE EXTENDING THROUGH 2024

LAS VEGAS – Garth Brooks, in partnership with Caesars Entertainment and Live Nation, announced today that his new Garth Brooks/Plus ONE Vegas residency at The Colosseum at Caesars Palace will be extending through 2024 due to the overwhelming demand for tickets to his first 27 shows. The new shows will announce in May of 2023 around the opening of the residency.

“You’re scared to death, you know, when they tell you that they’re going to put on a whole year of shows. And then, the first day of on-sale, they call you and tell you that the whole year is gone. That’s an amazing feeling, as you can imagine,” Garth admits. “And all of a sudden it hits you – ‘They want to extend this!’ Well, the only thing better than one year at Caesars Palace in Vegas would be two years, right?!! So I’m there!!”

Fans who signed up for the Verified Fan Presale who were unable to purchase tickets for the 2023 dates will be given priority access to purchase tickets to the 2024 dates.  To sign up for all Garth Brooks/Plus ONE residency announcements, including information on the new dates, fans are encouraged to visit www.Ticketmaster.com/GarthVegas.

While visiting the website, individuals can also preorder the Garth Brooks LIVE LIVE Boxed Set, which includes a commemorative book and 5 discs with over 50 of Brooks’ most celebrated live performances. Preorders for the brand-new boxed set will arrive before the holidays, making it the perfect gift for fans who want to celebrate the live legacy of Garth Brooks until they can see him LIVE at his Las Vegas Residency.