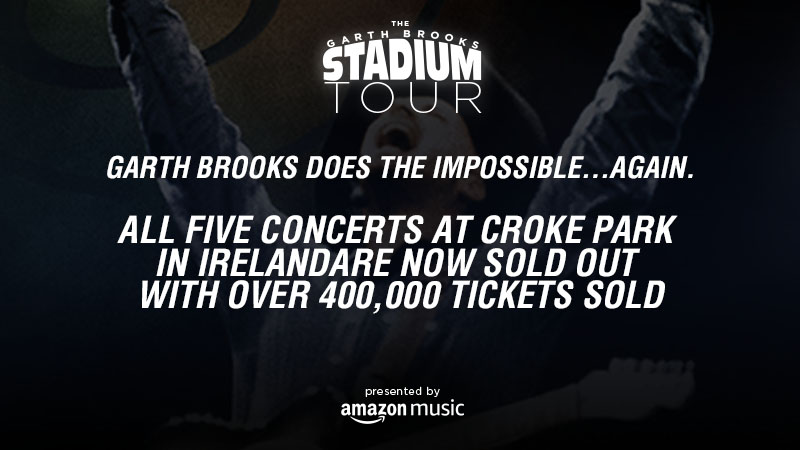 Garth Brooks Does The Impossible...AGAIN. All Five Concerts At Croke Park in Ireland Are Now Sold Out With Over 400,000 Tickets Sold

The Dublin concerts will be the finale of the Stadium Tour, which resumes with the on-sale for
Fayetteville, AR, Donald W. Reynolds Razorback Stadium

LOS ANGELES- November 29, 2021- "What was supposed to start it all, now is where it all ends." Brooks put the exclamation point on his record-breaking Stadium Tour by announcing the last stop of the tour will be in Dublin, Ireland, where on Thursday he sold over 400,000 tickets for the Stadium Tour finale next September. This was a feat done by Brooks in 2014 to start the Comeback Tour in Dublin, but due to unforeseen circumstances, all five shows were cancelled.

"I never dreamed we'd get the chance to try this again. I'm so grateful to all who made this happen," Brooks said.

An estimated 180,000 ticket buyers showed up for the chance to purchase tickets to TWO shows. Forty minutes into the on-sale, a third show was added.  Shows number four and five were added at the top of the hour.

The concerts will be September 9, 10, 11, 16, and 17 of next year. The concerts are being promoted by Aiken Promotions.
The last leg of the Stadium Tour begins with the on-sale for Fayetteville, AR, at Donald W. Reynolds Razorback Stadium. Tickets will be on sale Friday, December 3, at 10 a.m. CT.