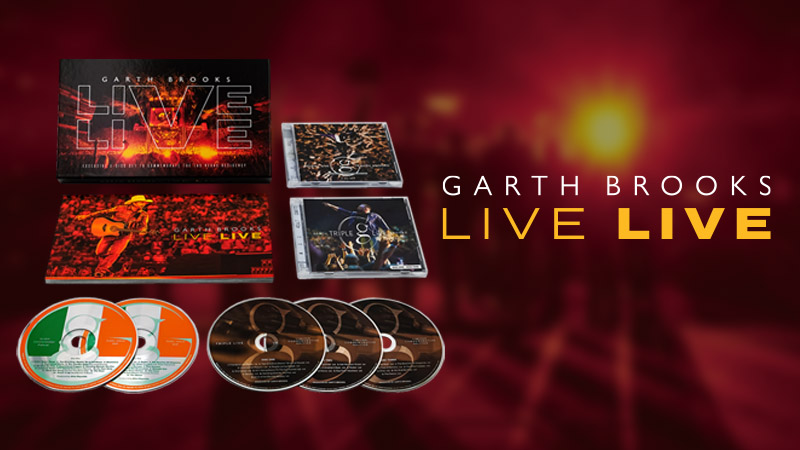 Garth Brooks Live Live Contains Five Discs of LIVE Music With One of Three Collector’s Covers of Both Double Live and Triple Live, Plus a Custom Book

In connection with the announcement of his Las Vegas Residency, Garth Brooks is releasing Garth Brooks LIVE LIVE, available for pre-order now.  The boxed set contains a 92-page custom book with live photos and 5 discs filled with over 50 of Brooks’ most beloved live recordings, as well as newly released recordings. The set includes the FINAL release of his celebrated Double Live album, with one of three randomly packaged collector's covers--the 25th Anniversary Edition of Central Park, the 25th Anniversary Edition of Croke Park, or the never-before-released 1989 Edition. Garth Brooks LIVE LIVE also contains Triple Live, featuring over 25 tracks from the record-breaking comeback tour and the Stadium Tour, including brand-new, never-released recordings and one of three new, randomly packaged collector's covers from the Stadium Tour.
“We are bringing Double Live to the end of its run,” Brooks comments.  “It's bittersweet...it's the highest certified record of our career, and it will live forever as 'the bridge' that took us to retirement and brought us back out of retirement fourteen years later.”
The brand-new boxed set can be pre-ordered now for arrival before the holidays so fans can celebrate the live legacy of Garth Brooks until they can see him LIVE at his Vegas Residency in 2023. Pre-order information can be found at www.ticketmaster.com/GarthVegas.
Brooks explains, “I get smartphone videos all the time of people opening tickets for Christmas, and what I have noticed is once they get past the realization they are going to a concert, they have nothing to 'enjoy' in the moment.  The LIVE LIVE box gives them something to open and enjoy while anticipating going to the concert...I love that!”