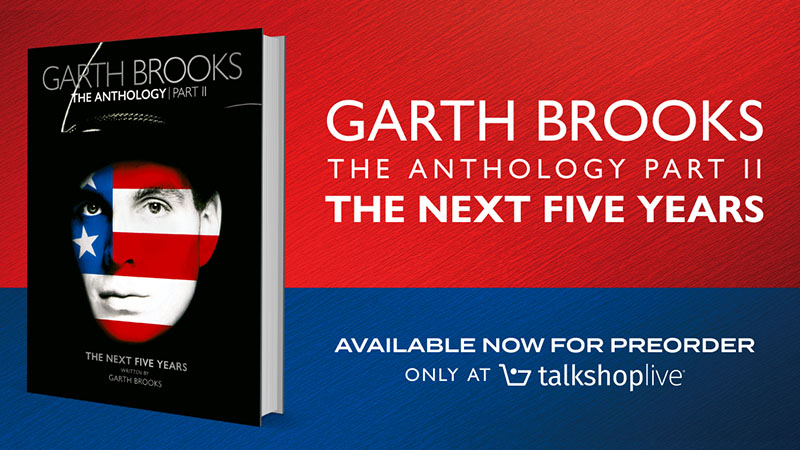 THE NEXT FIVE YEARS Offers a Front-Row Seat to Some of the Biggest Events in Country Music History, As Told by Garth and the People Who Were There When They Happened

Garth Brooks’s The Anthology, Part II: The Next Five Years is available for preorder NOW!  The Limited Edition Anthology is available exclusively through TalkShopLive at this link.
On August 1st, fans can join Garth live in his studio on TalkShopLive to hear some of the stories that are included in the Anthology, ask him questions, and maybe even hear some new music! RSVP here.
In The Next Five Years, Garth picks up where he left off in The Anthology, Part I: The First Five Years, telling his story in his own words and offering fascinating insights to his career and personal life from 1996-2001.  Trisha Yearwood says it best, “The way I see it, Garth spent the first five years of that crazy ride just hanging on for dear life! In the second five years, you start to see a captain steering his own ship.”
The Next Five Years takes an in-depth look at the stories behind the songs and recording sessions for Fresh Horses, Sevens, The Limited Series, Double Live, and Scarecrow.  What was it like to record “Beer Run” with George Jones?  Let Garth, the G-Men, Allen Reynolds, and Mark Miller tell you.  How would Keith Urban describe his first time recording with Garth?  Read what he has to say.  Which of Garth’s songs was released as the rough mix?

“These stories shaped my life and career. I can’t wait to share them with YOU!” Brooks said.
In addition to the music, The Next Five Years chronicles Garth’s 24-hour signing session at Fan Fair in 1996 that demonstrated his powerful and emotional connection to his fans.  It explains the reason for the delay in the release of Sevens and Garth’s decision to announce his retirement.

"I learned a lot!" Garth laughs. "The interviews (BOB DYLAN, KEITH URBAN, STEVE WARINER and more) just floored me! Miss Yearwood claimed there was a duet version of ‘To Make You Feel My Love’ that only she remembered.  But when we found it buried deep in the vault, I was amazed how raw and beautiful it was!"
Completing the anthology is a 6-disc set of musical highlights from albums released during that time—all of which will be heard in a new way after reading about the inspiration for the song and how the magic was created in the studio—PLUS two previously unreleased recordings, including a new duet with Trisha Yearwood.