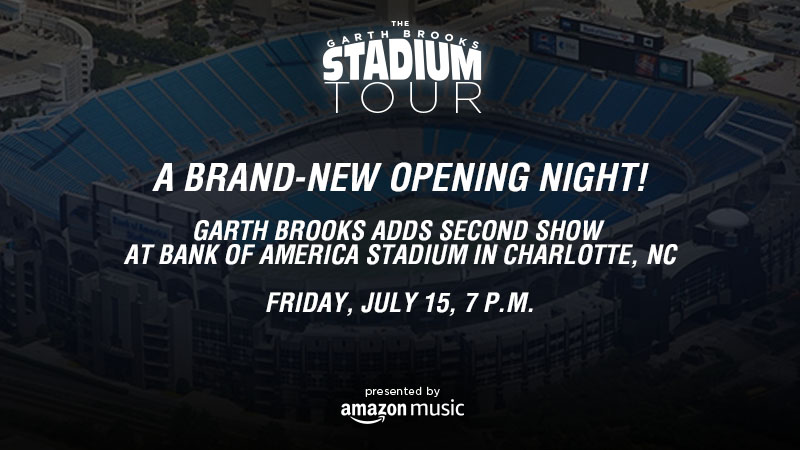 Garth's first time at the home of the Panthers and first time in Charlotte in 24 years!

"We learned from socials that people who had great seats for the shows before Covid, did not get great seats for the make up shows. So we decided for the make up show in Charlotte, we wouldn't even open up the top deck and just do two shows in lower bowl if the demand was there. Now any ticket in Charlotte is guaranteed a great seat," said Garth Brooks. "Now that Charlotte has taught us how to do this, I really want to think of a second show in the three other make up cities of Nashville, Cincinnati, and Foxborough...basically a brand new opening night! It doesn't matter to me if 200 people show up for the new opening nights, what matters to me is now everybody gets a chance to get a great seat. That thought makes me happy for them."

This will be Garth's first time at the home of the Panthers and his first time in Charlotte in 24 years! This will be the only Stadium Tour stop in North Carolina, South Carolina and Virginia. Over 70,000 fans purchased tickets for the anticipated 2020 concert before it had to be rescheduled.

The concert will feature in-the-round seating. There will be an eight-ticket limit per purchase.  There are only three ways to purchase tickets: at ticketmaster.com/garthbrooks; on the Garth Brooks line at Ticketmaster, 1-877-654-2784; or through the Ticketmaster app on your mobile phone.